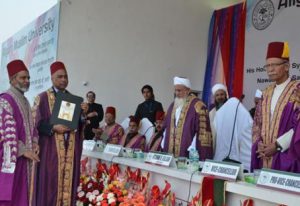 ALIGARH May 22: A US based non-profit organization “The Frank Islam and Debbie Driesman Foundation” (FIDDF) has released a sum of Rs. 1.5 crore as the first installment to the Aligarh Muslim University for the construction of a new Management Complex which will house Frank and Debbie Islam Department of Management and Faculty of Management Studies and Research. Mr. Frank Islam is an alumnus of this University.

AMU has already earmarked three acres of land near its founder’s house. The total project including the establishment of an endowed chair for entrepreneurship, innovation, corporate responsibility and business etc is estimated to cost 3 million dollar of which one million dollar will be contributed by the Aligarh Muslim University and two million dollars will be contributed by FIDDF in nine installments. The Aligarh Muslim University has already signed a Memorandum of Understanding with FIDDF to this effect.Read More

AMU made me what I am today: Frank Islam at foundation ceremony of complex named after him